The City of St. Ann began to function as a municipality on April 13, 1948. This is when the St. Louis County Court granted a petition for incorporation to residents of the area. The city actually began to develop six years before it was granted the petition. Charles F Vatterott, the developer and builder of most of the residential and commercial properties in St. Ann, started the community as a housing project for families of workers employed in nearby defense plants. It was one of the few defense housing projects in the country to develop into a permanent town.

The first commercial building was built in 1943 at the southwest corner of St. Charles Rock Road and St. Gregory Lane. It was occupied by a grocer, hardware store, realty office, drug store, barber, and beauty shops. Studies that were conducted revealed that a lot of the family heads during this time were World War II veterans and other returning servicemen that found St. Ann to be a young thriving community with moderately priced homes and attractive areas to raise their families. During the early years the community was confronted by many problems which the people solved in one way or another. Some residents felt, however, that many of the past difficulties could have been avoided and existing ones more quickly settled if the area had been incorporated.

In 1948, a sizable group of civic-minded persons headed by Charles F. Vatterott met to form a strong organization which would work to obtain a municipal charter for the community. The efforts of the group were successful and in April, the County Court granted the charter and appointed Frank Brown as mayor.

At the time it was incorporated, St. Ann was a fourth class city with around 500 homes and 10 business establishments within the city limits. At the first elections in April 1949, L. S. Brock was chosen as mayor along with Ferdinand Creely as marshal. Eight citizens, two from each of the four wards, were named Alderman. 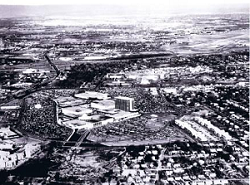 In 1950, a $3 million shopping center was built at the St. Charles and Ashby Road intersection. The project included four commercial structures with 32,000 square feet of floor space. Since that time, many new business and service buildings have been erected in the area. At this time, St. Ann boasted one of the finest one-stop shopping centers in the northwest portion of St. Louis County. In the same year, by a vote of 185 to 6, an extension of boundaries to include Airway Drive-in Theater, Buder Park, and Buder Terrace. In January 1952, a $25,000 bond, issued for the construction of a new City Hall, was approved. Prior to the completion of the new building in 1953, the city officials conducted municipal business in the basement of a department store.

St. Ann expanded its boundaries more in 1953 by a 161 to 25 vote that annexed a tract of land west of Cypress Road, north to Natural Bridge Avenue. Around the same time, Mr. Vatterott donated a 20-acre park site on Ashby Road. More expansions occurred east and north in April 1958 then, to the west and south in September 1962. Finally, once more to the south in November 1964 which increased St. Ann's area to approximately four square miles. Within its boundaries, there where now 5,000 homes, 112 businesses, and 17,000 residents.

The construction of Northwest Plaza, one of the largest shopping centers in the area, was added to St. Ann along with plans and constant ideas for improvements are indications of St. Ann's determination to grow and prosper.